There has often been discussion about the lack of response to candidates applying for roles. Indeed, I believe candidates are often treated very poorly and there are many stories about recruitment consultants never returning calls, or applications seeming to end up in the black hole of someone’s ATS. The other side of the coin is when a recruiter establishes a great relationship with a candidate and ends up creating false expectations and the candidate thinks he or she is a shoe in for the job. This can get ugly. So what is the right balance?

The Story Of Bob

Years ago, I had an experience with a candidate who had applied for a Cobol Developer role. Let’s call him Bob (sorry to any Bobs out there, this is no reflection on you). Bob had been made redundant from his last job after many years with that company. He applied for a role with us, came in for a screening interview with me and sat a technical test. He did very well on the test, the interview was ok, a few concerns but I decided to progress him to the next stage which was an interview with the line manager – a normal process.
He was not a stand-out candidate, but there are not that many Cobol Developers around and let’s face it developers are not necessarily hired for their stand out personalities (disclaimer: many developers I know have great personalities!). I then proceeded to reference check him. This is when our niggling concerns came to light – he was described by his former employers as “belligerent” and this is where the process stopped (by the way, this was verified by more than one referee). I informed him that he was not successful. End of story? Not quite.

Bob was under the impression that he almost got the job, and so therefore went on to become a serial applicant. He even tried to apply for a graduate role (he had 20+ years’ experience). He would ring me often and became a pest. Then he accused me of discrimination on the basis of his age. The climax came when one day he rang me. I answered the phone “Hello, this is Jenni Nelson”. He replied “Oh really? I thought it was the lying @#$%” (he used an expletive that is so offensive I can’t even allude to it). I hung up the phone, had a little melt down, spoke to the HR Manager who rang the police. He was warned off never to call again.

Why did this situation escalate? Why was Bob so aggressive? What did I do to warrant this treatment?

Here is my summation. Firstly there is no doubt that Bob was a little strange (said whilst twirling my finger around my ear and whistling) – yep, he was on the edge. He had been made redundant and had gone through a lot of rejection. This turned into bitterness.

Where I Went Wrong

However I did contribute to this unwittingly. I was nice. I am nice to people, I am friendly and I encourage people throughout the recruitment process. Bob was under the impression that he had a great relationship with me and that I would be happy to put him up for other roles. Crucially he thought that he “almost got the job” – he missed out on this one, but there would be more. In actual fact he didn’t almost get the job. His application failed at a key screening step and it is unlikely that he would ever get hired with that organisation unless he had some kind of personality transplant and anger management training. However I allowed him to believe that he was still a candidate for future opportunities.

My takeaway from this experience?

Use Your Words Carefully

Be aware of your language throughout each step. Avoid statements such as “Congratulations, your interview was successful and we would like to reference check you”. All that the candidate hears is “I was successful”. Better to say “The feedback from the interview is positive. We would like to progress you to the next stage of the screening process which is ….”

Ensure ‘No’ Means ‘No

When disengaging from a candidate, let your “No” be a “No”. If there is no room for “Yes”, ever, make sure that is clear: “We have evaluated your application and have decided that you are not a fit for the role.” If the candidate wants to know why, you can say “Based on our evaluation, we don’t believe you are a culture fit for the organisation”. Avoid getting into too much discussion. I usually say “look I’m sorry, but the answer is No”.

If you are in the industry long enough and deal with enough people, occasionally you will encounter the oddball candidate. Hopefully if you maintain good professional distance it won’t escalate. Thankfully this is a less common experience – most people I encounter are professional, courteous and a joy to deal with.

Jenni Nelson is the Recruitment Manager at blueAPACHE and has over 20 years recruitment, consulting, project management and business analysis experience. She is a specialist in consulting to organisations on their permanent and contingent staffing functions. This includes recruitment model review and redesign, developing business cases, aligning organisation’s business drivers, writing reports and importantly gaining buy-in from stakeholders. 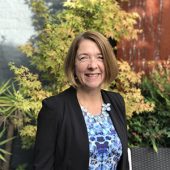