In the wake of UN Women Australia’s recent campaign “When Will She Be Right?”, Jo Vohland questions the role that recruiters need to play in ensuring transparency around salaries within their organisation.

If you or someone you know is experiencing or impacted by sexual assault, domestic or family violence, call 1800RESPECT on 1800 737 732 or visit 1800RESPECT.org.au. Help is available.

It’s hard to fathom that gender equality will not be solved within my lifetime. It won’t even be solved in the lifetime of Gen Zs. According to the World Economic Forum, it will take another 99 years to bridge the gender pay gap. That means that more than 6 billion more girls will be born before we get anywhere close to solving the problem.

UN Women Australia have released a new campaign “When will she be right?” to accelerate the gender equality goal in Australia. Produced by The Monkeys, part of Accenture Interactive, Copywriter + Creative, Lizzie Wood says the slogan seeks to highlight the detrimental effect of the laid-back attitude towards life we embrace as a cultural marker in Australia.

“Australians say ‘She’ll be right’ to dismiss problems we think will fix themselves with time,” says Lizzie.

“It’s a cultural complacency that things will sort themselves out, at some point.​ But for women’s rights, that point is still 100 years away.”

Fix it at the front door

In recent years, recruiters stopped asking for your current or most recent salary and instead started asking for your “salary expectation.” In theory, this language shift may seem progressive, but if you’re a woman or person from a minority background who has always been underpaid then it stands to reason that your “expectation” may automatically be lower. And there we have it – the simple rephrasing of a question unintentionally writes a significant design flaw into the system.

But this design flaw is entirely fixable by ensuring your salary ranges are not ridiculously wide and by declaring them upfront. Many people often say “what happens when they all pitch themselves at the top of the bracket?” My answer to that is simple – you have a structured criteria of skills and experience to review the candidate against, you are already assessing for their depth and breadth of expertise and suitability. The same applies to the bracket. Paying any new hire elsewhere in the bracket shouldn’t be seen as a problem because it means they still have scope to earn more in their tenure there – that’s an exciting prospect for many – that there is runway and a plan for salary increases.

Women are sick of waiting. Ten years to solve an existing pay gap is unacceptable

The Universal Declaration of Human Rights in 1948 recognised the principle of equal pay for equal work yet Australian women waited another 21 years for the concept of equal pay to be recognised in 1969. Now here we are 52 years later being told to wait 10 more. What a bitter yet familiar tasting pill for Australian women to swallow. Waiting a further ten years for equal pay means many female employees are unlikely to see parity in their current tenure.

A close friend contacted me recently when her employer shared details of the gender pay gap that existed within their organisation. She felt that a significant lack of transparency around both salaries and the objective value of the role she was in contributed to her pay disparity.

“I have no idea if this affects me personally and by how much. When I applied for the role they made a fairly big deal about being an Equal Opportunity Employment (EEO) Employer. I really took that to mean pay and opportunities would be equal too, not just the ability to be hired. The hiring manager asked for my salary expectation and I gave them the number but reflecting on it, I was underpaid in my former role. It was widely talked about that the man in the role before me earned far more than I did. In that role I was the only woman in the Leadership team; they all knew and accepted the salary gap. The other thing I found difficult is that my former role isn’t overly aligned to my current one, so providing a salary expectation against the new role and criteria was difficult. I had no way of gauging how they valued the role or what the current people (including my male counterparts) were paid to do it. It’s possible that the pay gap is following me from one organisation to the next and so does the exhaustion and emotion of being paid less than male colleagues.”

I have since engaged in many conversations about what listing yourself as an EEO Employer means to people. Generally speaking, it often boils down to “we won’t actively discriminate against you” in the minds of many applicants.

Is that really where we’re setting the bar?

(As an aside, I do see the value of EEO Employer listings to those who have experienced discrimination in seeing this in job ads – it effectively translates to “this is a safe place for you to apply.” Although it is heartbreaking that it this is even necessary.)

“In a commercial setting, you pay what you believe a resource is worth. What does it say to society when women are paid less than men for equal work? The gender pay gap is a symptom of discrimination and Australia’s gap is persisting. If Australia wants to uphold the 1969 promise of equal pay for women, bigger actions need to be taken. This starts with organisations becoming more aware of their own pay gap. WORK180 will be launching our Gender Equity Index in 2021. One of four pillars is equal pay for equal value of work and organisations will be asked to share their actions towards pay equity. This is aligned with the United Nations Sustainable Development Goal 8; Decent Work and Economic Growth. An organisation cannot be truly equitable and healthy until it correctly values its people.”

How you conduct your salary reviews can widen the gap

It’s not just at the front door where the issue exists. The way in which salary reviews occur can mean the gap becomes more entrenched and continues to widen the longer women work at an organisation.

According to my friend who experienced salary disparity with her male counterparts, when it came to salary reviews:

“It wasn’t a conversation, it was a blanket percentage offer, the same for everyone, but I later found out that several male colleagues pressed back and negotiated a higher rate”.

Another contributor said she didn’t feel she could negotiate on salary due to the flexibility around working hours and location offered by their employer. Her organisation advertises flexibility as a benefit and differentiator, thereby giving the impression that it’s a trade-off for salary. Yet she still works her full hours and is still fully productive. Post-Covid we are now ALL working flexibly so if that playing field is levelled, then any prior impacts on salary need to be addressed.

It seemed curious to me that people should expect or accept reduced salary as a trade-off for working flexibly, so I took to the polls and asked my LinkedIn network how they perceived it.

I received responses from 252 people from a variety of industries, roles and seniorities. Of the respondents, 90% said that flexible working should not impact their pay, whereas a minority of 10% viewed flex as a benefit and would trade salary for it.

My network further elaborated on their opinion in the comments feed:

I have been offering flexible working to my employers for forever. 4am phone calls, 5am flights, late nights working to deadline – I’ve been doing it for decades but it’s only now that I’m receiving the same level of flexibility in return. So Employers, thanks for finally attending our Flexibility party – we’ve been here a long time.

Who holds the keys to change?

I asked my network about the gap and the response was that the gap in some organisations is so large that they simply cannot afford to fix their gap immediately. Which to me translates to…

We can’t afford as an organisation to pay everyone fairly which means either our business model is flawed, or we underpay some in order to overpay others.

I took this to LinkedIn also and asked if people would accept this as a trade-off.

The responses on this topic were more mixed than the previous poll but again, terrific comments from my network.

One thing is for sure, for companies declaring a pay gap so large it will take them a decade to solve, it’s quicker to fix the front door than it is the content of the whole house.

Currently, organisations who don’t share salary ranges up front and rely on “what is your salary expectation?” put the onus of guaranteeing equal pay onto female candidates. Many applicants simply have no gauge of what people in that role are currently or should be receiving. This process – whether unwittingly or not – directly contributes to the pay gap of that organisation.

Is this fair to shift the burden of responsibility to the candidate? Where does the fault lie of the pay gap that impacted my friend and her predecessor? Is it her male colleague’s fault for negotiating a higher salary, or her fault for accepting a lower one? Or is it the fault of the hiring manager who allowed the salary disparity in the first place? They are, after all, the only party with all the facts in this scenario.

I reached out to Feminist, Change Expert and self-confessed hard-nose salary negotiator Natasha Redman for her view on what we can do to create real change today.  Here are her tips:

Natasha also shared with me some of her personal experiences that have helped boost transparency around her salary.

“As a candidate, I have been asked my salary expectations before they have declared the salary range. I always say 30% more than I am willing to settle for but say ‘but I’m willing to be flexible for the right role’ which indicates a willingness to negotiate.

A good friend of mine recently advised a prospective employer that she wanted a higher salary to help them close the gender pay gap and employer came back and offered her even more. Lesson – she was STILL underselling herself!”

So, what’s the takeaway from all of this? Recruiters and hiring managers play a critical, yet often overlooked, role in bridging the gender pay gap. Here’s my checklist that you can start working on to help bring about change in your organisation.

If you have more tips to share, let’s hear them!

“When will she be right?”. When you make a change in your organisation today.

I'm the Swiss Army Knife of Talent: Talent Acquisition, People Analytics, Psychometrics, Graduate Programs, Learning and Development and Career Transitions. I spend my days working with a Talent Futurist and Industry Stalwart and talking to ANZ's brightest talent minds. I also have the joy and honour of working on the largest talent event in the Southern Hemisphere. 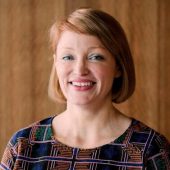