I must say it was a well-deserved win and a testament to the power of equality. Michelle Payne, in every sense of the word, had the odds stacked against her in a male-dominated horseracing industry and she has every right to celebrate her magnificent Melbourne Cup victory.
I can’t comment about Michelle’s thoughts on the treatment of women in the industry, though, but her comments for chauvinists to ‘get stuffed’ would imply she has had to show more resilience and courage than her peers on this journey. That she emerged victorious is a sign of her triumphing against adversity and prejudice.
However, if we go deeper into the issue, you could also say we should not be celebrating the first time win of a woman making it in a male dominated sport as triumph over misogyny. Success is when societal structural changes occur to make the environment less hostile for all women in sport.
Michelle’s talent certainly progresses the conversation and I am pleased to see a woman celebrated for something other than winning fashions in the field. However, as in business, one female boss does not fix the ‘too few female leaders’ problem. A market place that values diversity of thought, experience and backgrounds, that allows all individuals to flourish, is when the business community truly benefits.
Michelle’s win will no doubt be used by the racing industry to boost popularity from a public dwindling of support for the gambling, animal cruelty and reference of women as ‘fillies’ that is the Melbourne Cup.
This also highlights to us what the statistics have been saying for years – the more gender diverse your team/industry is the higher the financial returns, and I have no doubt that Michelle’s gender will be heavily leveraged by Victoria Racing Club to attract many new members over the coming year.
Maybe this time around people will finally sit up and take note.

For more on diversity and inclusion check out this blog written by Amy.

Amy Cato is the Managing Director of Executive Women Shortlists, a national search firm dedicated to facilitating talented Executives into Top 200 ASX companies. Amy has written for several online publications during her thirteen years agency experience and is a frequent guest speaker. She is the Company Secretary of WIRE and a Director for the Australian Quadriplegic’s Association. Outside of work Amy runs a volunteer job club and is a spokesperson for Mackillop Family Services Campaigns due to her participation as a respite foster carer. Connect with Amy on twitter @Amy_Cato_ 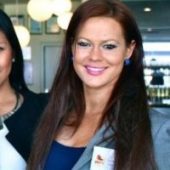