At first I was mad at his response. Then I heard him out and a light bulb switched on…I was the lucky one. I was privileged. I was on the positive end of a gender bias.
Let me take you back to a conversation my husband and I were having about this time 12 months ago.
We were discussing which days our kids (4yo and 2 yo) would be in kinder/childcare and how on earth we would manage work days around them to manage in the following calendar year. Or rather, how I would manage my work days around it. My husband, like majority of husbands I know, continued working five days in the office after our kids arrived, albeit whilst providing amazing support in all other ways Dads can – going 50/50 on childcare pick up, 50/50 on sharing the days we receive that dreaded call from childcare that your toddler has a temp etc. I had spent that time working flexibly, managing to fit in my role as a Senior Marketing Manager working three days in the office plus an additional day at home per week.
[bctt tweet=”It’s time to tackle the gender bias facing Dads who want more flexible working arrangements.” username=”ATCevent”]
Like my husband I had a senior corporate role. Like my husband I had a team of staff reporting to me. I just felt that this year it was time we both shared the part-time load given we both have equal career aspirations and successes so far.
His response to my request was “<Long pause>…Well, I would like to be able to support more by working less days, but that would be a seriously career limiting move for me. It is just not the done thing for men.”  Me: <Insert blank face emoji> <Insert angry face emoji >.
I had no words. I felt trapped and angry at the same time. He saw the look on my face and realised he needed to further explain his side of the fence.
Whilst his organisation is family friendly in the way that it is okay for Dads to sometimes come in late after dropping the kids to school, or sometimes leave early to see them play after school sports; going that extra step and asking for a more flexible working arrangement was just not the done thing for guys who wanted to appear like they took their career seriously.
In reality, this is because by being a part time working male, he would be in the absolute minority. ABS data from 2012 shows that women are almost three times more likely to work part-time than men (33 percent vs. 13 percent). Distill that down to my organisation and as at 2015, at Senior Management level, there are no men working part time and two of eight women working part time, myself being one of them.
No wonder my husband felt that in asking for this ‘privilege’ it would give some sort of signal to the executives that he was not serious about his career.

I am acutely aware that I am in a minority that I have had such a positive experience with my employer regarding my current working arrangement as a parent and have rarely felt it was a career-limiting move to go part-time*. At the same time, I am in the majority when it comes to which gender are more likely to ask for and be given a part-time working arrangement for typically full-time roles. So it was at this point I all of a sudden recognised a privilege I’d never considered. Because I was ‘the mum’ it was okay for me to ask for flexible hours. I was lucky to be able to ask for this and (in my organisation) genuinely feel it would not impact perceptions of the dedication to my job and my career.
Rather than feeling trapped and angry, I felt elated. How lucky am I to be able to spend precious time with my young kids during the ‘working week’ yet maintain my career aspirations**.
There are a host of companies genuinely trying to modernise their parental leave and flexible working arrangements policies to be inclusive for both female and male employees. The most popular, modern parental leave policy is likely to include something like a three-six month period Dads can take leave to stay at home with their kids whilst their partners go back to the office. Whilst wonderful (and the Dads I know who have taken advantage of this have loved it) it is not sustainable.  Young children of pre-school age need devoted attention for many years, let’s say around six years per child. Not six months. So three-six months is noble, but what about the rest?
Gender diversity in business is a complex topic with no single solution. But I believe if flexible working arrangements can be normalised to a point where Dads feel comfortable to ask for and receive, less days in the office it could have a huge impact on keeping women in the game.
[bctt tweet=”Dads, it’s time to be an agent of change, and don’t be afraid to ask for more flexible work options.” username=”ATCevent”]
Employers, what can you do? Stop your unconscious gender bias towards Dads asking for flexible work options.
Dads, what can you do? Ask your boss the question, swallow your pride. Be a change agent.
What can we all do? Use any social media channel you use to recognise and celebrate a Dad you know bucking the current norm and helping our culture move towards a truly equal state: #dadsthatdo.
Together let’s change the corporate workplace where it is perfectly normal for Mums or Dads to work flexible hours during their family’s early years.
Disclaimer: Opinions expressed above are my own and limited to my own personal experience and observations. You will experience your own unique journey and are likely to have a different set of circumstances with regards to parenthood and gender equality. There is no right or wrong way, just do what works for you, for now.
Images: Shutterstock

This article was first published on LinkedIn on October 13th, 2016.

If finding and hiring top talent is important to you, check out our upcoming Sourcing Social Talent conference:

Olivia is a highly driven, people and results orientated marketing professional with over 13 years’ experience covering marketing strategy, people and agency management. Her years of experience have included budget planning for multi-million dollar marketing campaigns in conjunction with creation of long term strategic plans for future growth. She has also worked effectively with stakeholders from across business functions, including C-Suite executives, to create positive workplace cultures and drive best business outcomes. 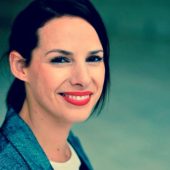