We need more women in the workplace! Not just as employees but we need women to be in leadership capacities where they can affect change. Gender diversity in the workplace can bring about a revolutionary change to way businesses function and propel our economy onto the next level!
Really? Or so they say.
Before you criticise me for my cynicism, I would like to clarify that I’m all for gender diversity and I truly believe that having a good balance of genders in any organisation can and most likely will work wonders for the business. However, what I am frustrated with is the lack of focus on other forms of diversity. Diversity does not stop at gender!

In my opinion, organisations are only too happy to jump on to the gender diversity bandwagon because it is the easiest way out of the diversity conundrum. Getting more female directors onto the board seems the most straightforward solution to shutting down critics and fulfil public and shareholders’ expectations on diversity.
This narrow look at diversity among organisations in Australia is clearly reflected in a study conducted by Hays Australia recently. Here are some of the key findings:

However, when it comes to gender, 66 percent of respondents say their organisation is gender diverse, and over half said women are equally represented in leadership positions. However, it is interesting to note that 48 percent of respondents said they are not satisfied with the career paths available to women in their organisation, but that’s a discussion for another time.
Nick Deligiannis, Managing Director of Hays in Australia & New Zealand said, “Many organisations strive for a diverse workforce, but when you look at the current situation in Australia we see that reality falls short of these lofty ambitions.”
[bctt tweet=”Many strive for a diverse workforce, but reality falls short of these lofty ambitions.” username=”ATCevent”]
“One problem is that when people think of diversity, they often focus on gender diversity alone. But a truly diverse workforce is one inclusive of people of various genders, ages, cultural backgrounds, Aboriginal and Torres Strait Islanders and people with physical and mental disabilities,” Mr Deligiannis added.
Respected recruitment industry blogger and commentator, Ross Clennett, also questioned the level of commitment from organisations in trying to increase the diversity of talent within their ranks.
“I think many CEOs and other senior leaders may say this publicly but I am unsure this has filtered through to the hiring managers who are still, mostly, very narrow in their consideration of suitable candidates,” he said.
This trend is perpetuated by industry groups such as The Australian Institute of Company Directors (AICD), who has been focusing on campaigning for greater gender diversity in big organisations. As a result, since 2009 women in senior leadership positions have indeed increased from 5% to 42% today and large companies like BHP Billiton have set targets of a 50: 50 gender split by 2025. While this is all good, the question I’m asking is what about other forms of diversity?
The media has also continuously focused on the lack of gender diversity in certain industries and, in particular, the issue of gender pay gap while neglecting the rest. As a result, we see and hear many stories as to what ASX 200 companies are doing in regards to improving gender diversity and the different targets they have set for themselves. While this is a good starting point for diversity and equality, we need more.

To create a diverse workforce, there are certain measures you can put into place.

If you are questioning the significance of this, watch the movie ‘The Intern’ starring Robert De Niro and Anne Hathaway.
In this film, a start-up run by a high flying CEO (Hathaway) hired a 70-year-old intern (Di Niro), a retired executive, as part of the company’s community outreach programme where seniors would intern at the firm. Hathaway was somewhat skeptical at first but Di Niro’s character eventually won her over. He also became something of a father figure to the younger worker who looked to him for guidance on not only growing the business, but as individuals too.
You can’t buy experience, but you can learn from it.

Keep up recruiting from different cultures. The vast majority of Australians (84 percent) believe that multiculturalism has been good for Australia and hiring the next candidate from a different culture might give you the diverse thinking that you need to stay on top.
Our ATCHub editor Stan Rolfe recently wrote an article discussing diversity and the importance of closing the Indigenous employment gap. Have a read here.

Finally, don’t see the disability, see the person. Just because someone has minimal eyesight or a hearing problem, it doesn’t mean they are unable to contribute to your team effectively. Technology has become a great enabler and these problems can be overcome easily.
Besides, projections for 2050 indicate that one in every four Australians will have hearing loss. So you might be wise not to cast your opinion on someone too soon. Be inclusive and be ready to implement a disability recruitment programme that sees everyone as equal.
That way both you and the employee will reap the full benefits of the partnership.
Images: Shutterstock

After struggling to decide where his future was going, Nicholas was tossing up between medicine, law, carpentry and just about everything in between. It wasn’t until a convincing voice turned him onto marketing and communications where he found his passion. Nicholas is a recent graduate from Swinburne University of Technology with a background in marketing and a passion for everything digital. Nicholas is a helping hand at ATC as the digital marketing and communications coordinator/editor. His keen eye for creativity is sometimes so far out of field he doesn’t even know where his going with his ideas, but manages to get there eventually. 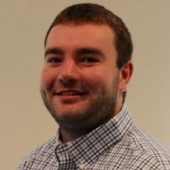